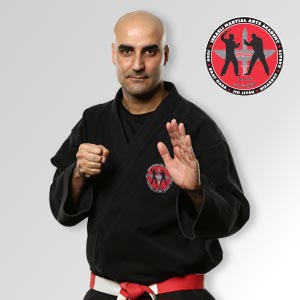 Hezi Sheli is the head instructor of the Israeli Martial Arts Academy in Westlake Village, CA and is one of the highest ranked and experienced Israeli Self Defense instructors in the U.S. A veteran of Israeli martial arts, he holds a 7th degree black belt and received his training under the living legend Grand Master Dennis Hanover, founder of Dennis Hisardut Ju Jitsu, and from his two sons Yaron and Guy at the Be’er Sheva official gym in Israel.

Hezi is also a skilled marksman and firearms control expert (Certified instructor). In 2012, in response to the breakout of gun violence attacks in this country, Hezi began teaching private firearms seminars; Israeli military style (IDF). He believes that adult fighters, both beginners and advanced should also have the basic and advanced skills and knowledge necessary to be safe, proficient, and confident with all firearms.

Originally a combatant in the IDF (Israeli Defense Forces), Hezi went on to work internationally as a security professional, serving as a bodyguard for celebrities and high profile individuals and continues to train the top security teams of Hollywood's A list celebs. It is his real world life experiences which give him the knowledge and the authority to speak about everyday self-defense; what does work, what doesn't and more importantly why.

Born in Be’er Sheva, Israel to Avi and Mazal Sheli, his early childhood memories were filled with the reality of shelters and gas masks against the chemical threat attacks that were an every day occurrence during the time of the 1st Gulf war and the 1st Intifada (Palestinian uprising). These violent events and anger at the bullying happening in school motivated Hezi at the age of 12 to join the Hisardut system. It was here that he received the life lessons that prepared him to be alert and on top of his game in any given situation at any time in his life.

The training received from Dennis changed him very quickly from a shy insecure young boy to a strong, fit and confident teen. Hezi’s perseverance won him both local and national Hisardut championships on a regular basis. In 1995 at the age of 16, he had already successfully tested and received his brown belt and began instructing Hisardut to adults, teens, children and children with special needs. Two years later he went on to receive his 1st degree black belt before joining the prestigious IDF Special Ops unit Palsar Givati.

After 18 months of anti-terror, S.W.A.T. reconnaissance, intelligence techniques, Krav Maga and other military training received at the IDF, Hezi was called upon to test his skills with his team in Lebanon and Gaza. During these non-stop anti-terror missions, Hezi was given the opportunity to enter the officer candidate school but turned it down to stay with his team and support them against the on-going attacks, where he served as 1st Sergeant until his time with the military service was completed in November 2000.

Hezi went on to graduate with honors from Ben Gurion University, Be’er Sheva, Israel. In 2007 he came to the United States with 2 suitcases and $2000 in his pocket. Hezi earned a living as the Director of the Israel Ministry of Tourism for the Western Region in Los Angeles. It was here that he met his wife Sadhna. In 2010 they opened The Israeli Martial Arts Academy in Westlake Village, CA.
In the summer of 2011 Hezi was awarded the U.S. Martial Arts Hall of Fame given to the Israeli delegation by Grand Master Dennis Hanover in Florida.

Hezi continually puts his skills and techniques to the test. In 2009, 2011 and 2015 he was invited to compete in the prestigious Hisardut Championships in Israel representing the U.S. Hezi fought against a group of International and Israel's best fighters, winning his division in each event and bringing home Gold for the USA.

Hezi routinely travels to Israel to update his training and bring back the latest techniques in anti terror and self-defense from a country where there are no opportunities for mistakes or second chances. His students receive the most modern training methods available so that they will always be prepared and alert given any situation any time, any place.

On 04.09.17 Hezi was summoned back to Israel to test for his 6th degree black belt, making him a "Master". This certification elevated Hezi to a level in which few ever reach in the system!

In the beginning of 2018 Hezi worked on the set of a television series as a firearms/martial arts consultant and actor. He works with A-list celebrities and provides his expertise for more authentic production value. The series aired on "Showtime" and is featuring new episodes each week.

On 03.01.18, Hezi had the honor to be interviewed by the prestigious "Black Belt Magazine". This publication featured him and the IMAA as an authentic Israeli self defense and anti-terror method. The article was published in the August/September 2018 issue.

To Hezi, Israeli martial arts and self defense is a philosophy of living based on respect, discipline and self-knowledge. It’s primary principles are "Find Your Strength, Honor Life, Never Give Up!" From these tenets spring behavioral patterns that direct the way we live and conduct our daily lives, make decisions, grasp opportunities and most of all, enrich our soul. Students learn to discover their hidden strengths so that the choices life continually presents them with become opportunities for growth.

In 2019 due to conflicts with the DSJJ Israel management, with a heavy heart Hezi separated from the system.

Hezi is eternally grateful for what Dennis and Guy Hanover gave him as a child and young adult.

On 12.03.20, during the climax of the Corona virus pandemic, Hezi was awarded his 7th degree black belt. His eclectic knowledge, unwavering dedication to his students and community, and service to the continued growth of the Israeli martial arts is what earned him this advanced degree.

2020 was an extremely challenging year for Hezi, the gym and the entire community. COVID-19 put a substantial strain on the gym's and ability to operate. Hezi forever appreciates the strong community support and perseverance from his dedicated students.

In September of 2021, Hezi was honored to host the Tokyo Olympic Judo Champion from Israel, Timna Levy. She taught and exclusive Judo workshop. Hezi and his students enjoyed the unique training and Timna's specialized Judo experience.

On 09.14.21 Hezi initiated an annual class event to honor the victims of 09/11 and to ensure they will never be forgotten.

For details on his current classes please click here.